skip to main | skip to sidebar

An open letter to the man with the DUI 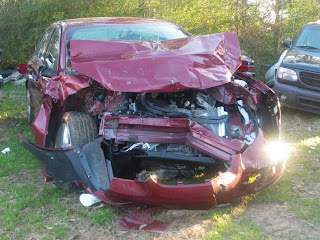 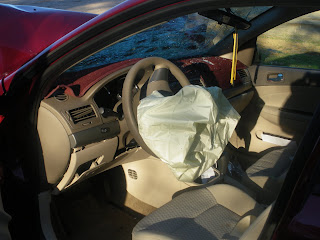 Mr. Darrin Paul Ellis,
I find that the tactics you and your attorney employed in court today to be most heinous. After delaying the court trial month after month with your stall tactics (as I found out today, your hope was that we would not show in court and you could continue your "not guilty" plea), you suddenly switched your plea to "Guilty" in order to prevent my daughter from having her day in court.
Her one chance to speak up about the horror of being involved in a head-on collision with you on that fateful night was snatched away from her today, while you managed to work the insanely lax DUI laws in your favor. Please realize that I don't for one minute believe that this is your first ever offense. You are 39 years old and you should freaking know better by this point. Why, oh why couldn't you have called a family member or a friend to come and pick you up after your long night of drinking?
Did you see my daughter's car after that accident? I did... I took tons of pictures of it. The blood that dried up in the console between the seats was the hardest thing of all to see. I broke down and cried that day. I suddenly realized in all too clear a manner just how seriously blessed we were that night you ran head-on into my daughter's car. By all the laws of physics, she should have been dead. But God saw fit to keep her safe during a very scary time. He was with her in that car that night and I have thanked Him daily for the safety he has kept her in.
My daughter is no longer comfortable driving at night, neither can she relax when someone else is driving. For the last 8 months she has had to change her way of living to prevent the need to drive after dark. All this because of you. I hold you completely responsible for that night.
I hope that this time you've learned your lesson and any future drinking events will be with a designated driver in tow. I don't think the $800.00 fine and the $150.00 court fees, plus a suspended thirty day jail sentence, with an unsupervised one year parole (along with a court approved substance abuse program) is anywhere near enough punishment for what you almost stole from our family that night. My only consolation in this is that I believe the scales do eventually balance and you will one day get what you deserve. I just hope when that day comes you don't take some other innocent driver with you.
I hope that night haunts you for the rest of your life. I know it will me.

Estela
married for 31 years to my High School Sweetheart. We have 3 children, ranging in age from 20 to 24, 2 girls and a boy. I'm originally from Arizona, but currently live in Alabama because I'm a camp-follower. My hubby has been in the Army for over 33 years now and it doesn't seem like we are getting any closer to retirement. But that's fine by me. My life has been quite the adventure thus far and that is at least partly due to the constant wind of change that flows through our lives. My own work background is rather diverse. I've been everything from a nanny (before my children), a portrait photographer, medical assistant, office manager and insurance secretary (for medical offices) to all the unskilled jobs typical for someone that moves around a lot. I've also had long periods of being a SAHM, the one thing that I truly enjoy the most.In 2012, I became a registered nurse. :)